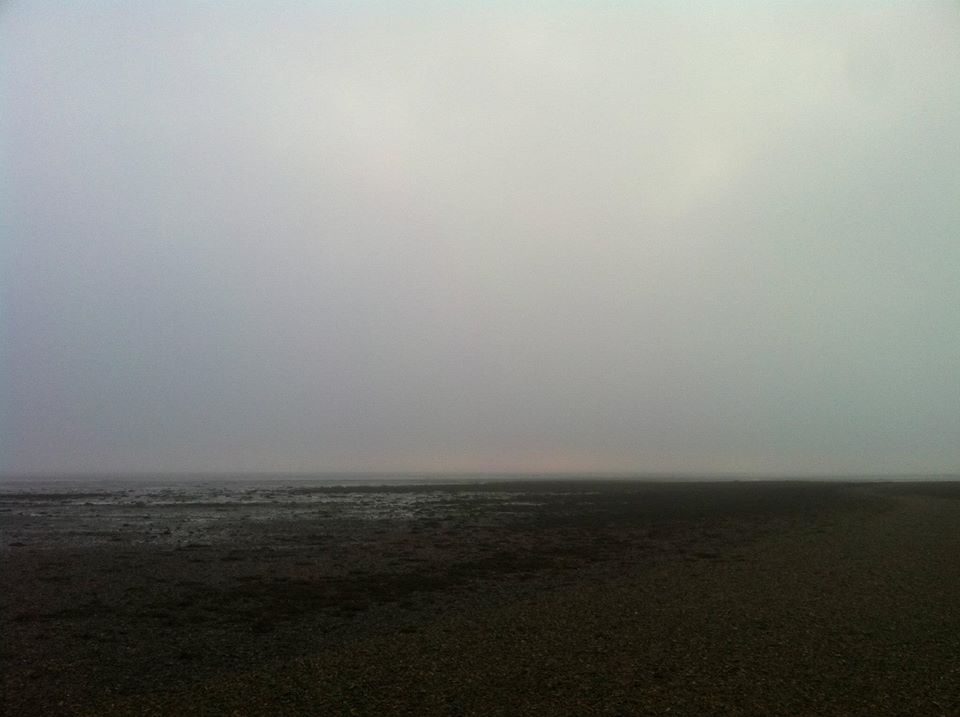 I’m very aware I haven’t written anything here for a few days. It’s a good job I don’t have many followers! A lot of writers seem to be finding these times inspiring from a creativity perspective. I’m not. I have managed to write a couple of haikus for a daily Facebook page – and am quite happy with one of them. I will post it and share others from the Daily Haiku page here as and when I think it appropriate.

During lockdown I should have plenty of time to utilise writing exercises and play with various formal structures and prompts, so as to respond to all the activity out there and be a part of this cultural dialogue, using it as a spark for new work. But I’m not currently in the mood for writing anything about the Coronavirus pandemic.

Part of this might be around trying to avoid being overwhelmed by what is going on right now. I write using a laptop, and could easily spend hours on Facebook, Twitter or various news pages, getting lost in the latest reports and opinion pieces covering the feckless ineptitude of this government in their handling of the crisis.

Like many people I have to be careful. I was diagnosed with depression in 2015, (though may have had it before – the poem at the end of this post is at least twenty years old). It’s a relatively mild form, so I am able to function normally most of the time. It doesn’t noticeably affect my day to day work. I really feel for those whose “black dog” is bigger and more intrusive.

There have been occasions where I have felt the need to take a step back from non-core activities to protect my health – I gave up my roles as chair of governors at a local secondary school and chair of Tongues and Grooves in the Community because of it. I’ve also skipped a good number of events for the same reason.

I do know the poems about Covid-19 will come – whilst I have written very quickly about specific events previously, sometimes it takes a little longer for the ideas to germinate into something for the page. In the meantime, I’ve been working on my annual business accounts, keeping the house reasonably tidy (ish), and playing Fallout 4 – a post apocalypse survival game – on the PS4. Well it’s good to be prepared.

Anyway, what started as a post about one thing has turned into something completely different. Clearly many people’s mental health is going to be very fragile during and after the lockdown. So please be gentle, be kind, and look after yourself and others around you.

…as a hulking fog-front snuffing out the sun.
Most days it is a vague shape on the horizon,
waiting for the weather to turn.

The worst are those when the sky is brittle clear,
cold enough to snap
into so many defenceless pieces.

These are the times you can’t see it coming,
can’t stiffen or prepare
for this whitening suffocation of thought.

Clouds are clouds whether visible or not,
as rain starts pouring
through cracks in a porcelain sky. 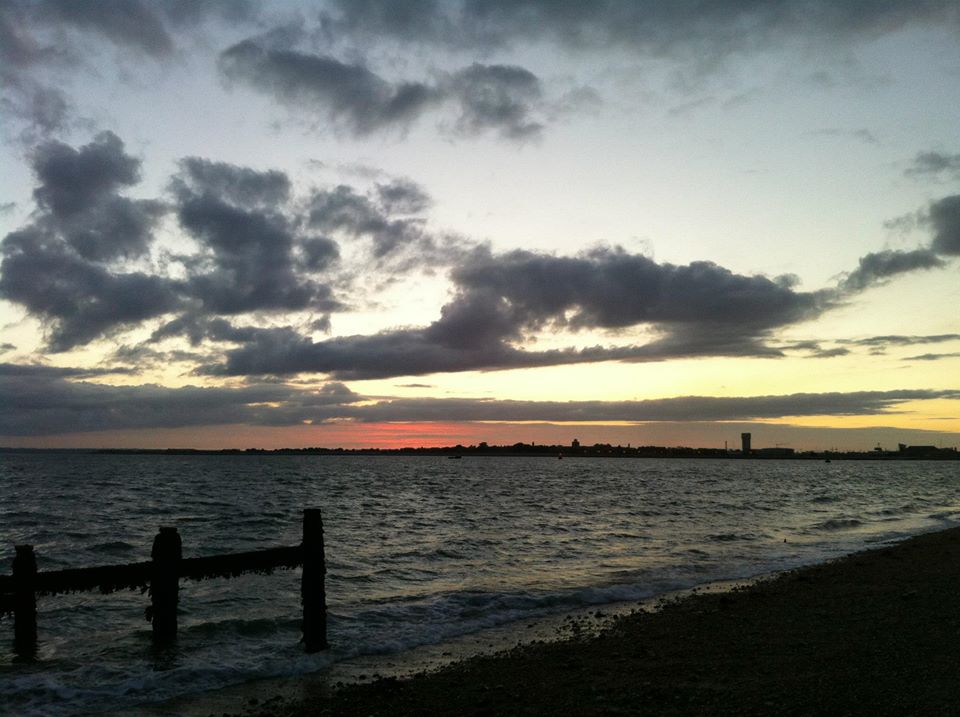 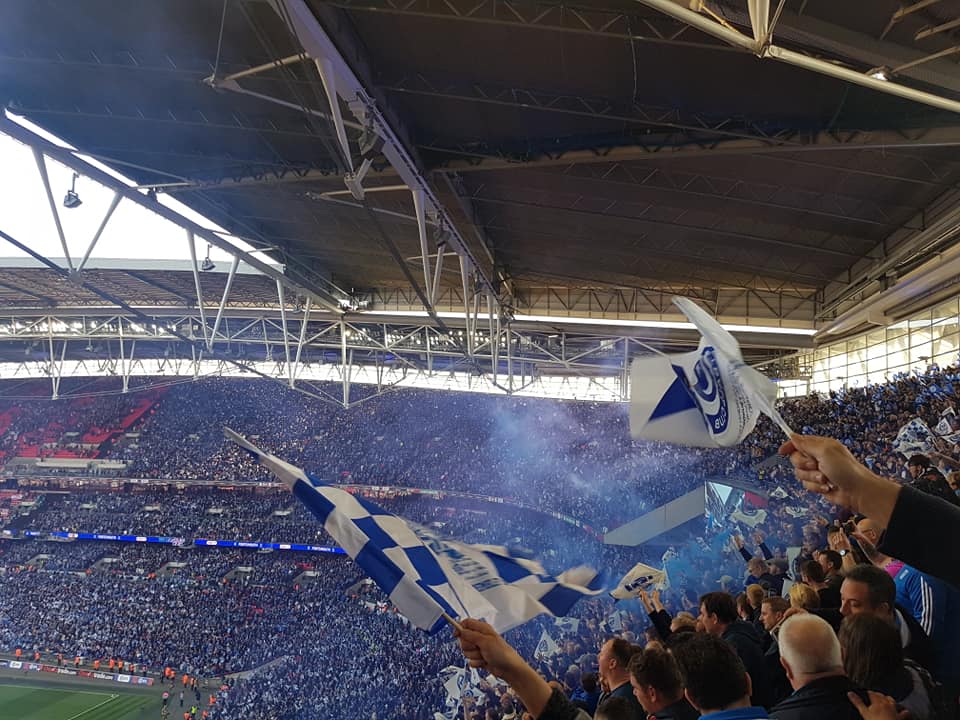 In other circumstances I would be at Wembley today, along with another 50,000+ Portsmouth FC fans, for the final of the Leasing.com Trophy. Blue skies, a beautiful spring day, the stuff of memories (or nightmares depending on the result!). A real shame – though the stadium’s empty silence today is of course of minor consequence compared to what else is happening in the UK and around the world right now.

I’ve been lucky though. If you had told me twenty years ago that I would have seen Pompey at Wembley 6 times already (two FA Cup Finals, two Semi Finals, a Charity Shield and last year’s Checkatrade final – from which the cover photo is from – I wouldn’t have believed you). I feel very sorry for those Liverpool fans waiting at Anfield for 30 years for a league title.

In 2008 Pompey won the FA Cup for the first time since 1939. During the course of the war, the trophy travelled around various safe houses, eventually ending up at the Bird in Hand pub in Lovedean, where it was kept above the bar for three years. In 2009 the trophy went back there for one night of celebration, and I was lucky enough to be in attendance, (there is a photo of me on a hard drive somewhere holding the FA Cup).

The poem that follows is about that evening, and about that sunny spring day in 2008 when the cup was won again after a gap of 69 years. It’s also about my home, this city by the sea and how much it suffered between 1939 and 1945.

It first appeared in South Poetry Magazine, appears in Landings , and can also be found placed on the Places in Poetry map on the Bird in Hand pub in Lovedean, a few miles north of Portsmouth.

Apart from the connection to today’s non-event, I thought it worth posting at this time because of the ending. Whatever happens over the coming weeks, most of us will get through this, and have plenty of future opportunities to live, to celebrate, to enjoy each of our own personal victories over the coming years. Good luck and good health.

We drink in the presence of greatness.
A glorious bird of paradise
that fills the room with life.
Wanderers to Portsmouth all roads between,
a coach trip ride through hedge-screened fields.

This monochrome world that we engraved
as so many lives were sliding past.
Waiting for the blackout to end,
as if nothing we did really mattered,
as if watching was all that there was.

So we taped up all the windows,
made do with any small victory,
turned out the lights and kept quiet.
As the radio spat static and crackled,
keeping our hopes in the dark.

And here we are only nine months on,
a country pub where they kept it safe
for five lost years as the city burned,
payloads emptied on a scrap of earth.
Abide with me all flags at half mast.

Abide with me and a sea of blue.
Wembley stadium and Kanu scores,
forty-something men so close to tears,
my daughters and I in our Pompey shirts.
The final whistle on a perfect day.

And here we are on the journey home,
brilliant colours will fade to none,
as the flags we carry are furled away.
Like Tommy Rowe at ninety-two
leaving all thoughts in the dark.

So drink to the presence of greatness,
for everything you do really matters.
Enjoy all of your victories.
Turn on the lights and sing out,
for living is all that there is.

* Wanderers were the first winners of the FA Cup. Tommy Rowe was the last member of the ’39 team to die. Abide with Me is sung at the start of every FA Cup Final, and often at remembrance day services.