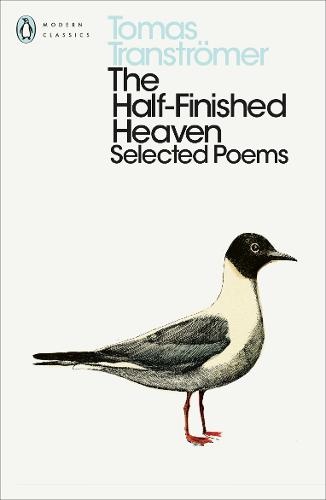 I’m new to Tranströmer – The Half-Finished Heaven was a Christmas present from my daughter, and I am still working through the poems. Maybe this post would have been better in a few months’ time, but I thought it would be interesting, at least once, to write about a poet on first reading of their work.

As a starting point, here’s the title poem of this selected poems collection, published by Penguin Classics in 2018;

The eager light runs into the open,
even the ghosts take a drink.

And our paintings see the air,
red beasts of the ice-age studios.

Everything starts to look around.
We go out in the sun by hundreds.

Every person is a half-open door
leading to a room for everyone.

The endless field under us.

Water glitters between the trees.

The lake is a window into the earth.

I think it’s an extraordinary poem, full of seemingly random connections of disconnected images that speak of something much greater. Transtromer is a writer for whom the spaces between are as important as the words themselves. We are asked to fill in the gaps ourselves.

All the poems in The Half-Finished Heaven were translated from the Swedish by Robert Bly, so my view of them is heavily influenced by Bly’s translations. It’s an interesting discussion point when reading poems in translation – how much do we as readers get from the original poet, and how much from the translator? There’s a good post on this by Martin Crucifix in his poetry blog here;

Tomas Tranströmer was born in Stockholm in 1931, and died in the same city in 2015. He published fifteen collections in his lifetime. His work has been published in sixty different languages, and he was awarded the Nobel Prize for Literature in 2011, to mixed reviews. See this article in the Guardian for further details;

Though there doesn’t seem much to take from Philip Hensher’s criticism in the Telegraph, as reported in the above article – Hensher apparently wrote that …Time has shown every single Swedish winner of the prize to be ‘a little phenomenon of no interest’ outside their own country.

Teju Cole in the New Yorker was more fulsome with praise – Tomas Tranströmer, who was awarded this year’s Nobel Prize in Literature, has for years now been one of my ports of refuge…to read Tranströmer—the best times are at night, in silence, and alone—is to surrender to the far-fetched. It is to climb out of bed and listen to what the house is saying, and to how the wind outside responds.

I can see what he means. There are lines in all of the poems in this book that really stand out with their mixture of surreal strangeness rooted in everyday life.

In The Gallery he writes;

That woman keeps buying more and more things
in order to throw them into the jaw of nothing
that wiggles around behind her.

Or there’s this, the opening stanza from After a Long Dry Spell;

The summer is grey now strange evening.
Rain creeps down from the sky
and lands on the field silently
as if it intended to overpower a sleeper.

Another good example is his long poem, (well, long for Tranströmer), Schubertiana. In the Bly translation, the first stanza (there are five in all), starts as follows;

Outside New York, a high place where with one glance you take in the houses where eight million humans live.
The giant city over there is a long flummery drift, a spiral galaxy seen from the side.

The stanza ends with the following long line

I know also-statistics to the side-that at this moment in some room down there Schubert is being played, and for that person, the notes are more real than all the rest.

There’s a film interpretation of some of the lines from this poem by British Director Martin Earle, (it’s a different translation to that by Bly), which I think captures some of the surreality and disparate connectivity of much of Tranströmer’s writing. You can view it via the following link.

What do you think?

Obligatory end-of-blogpost-link – The Half-Finished Heaven is available on my Bookshop here. Any commission I make goes towards the running of this site (so far I am at £1.00 in total, so it’s not exactly a financially profitable enterprise – but isn’t that the way with poetry for most of us!?);