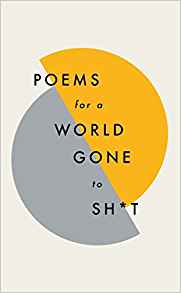 I was given this book as a Christmas present a couple of years go. It’s a relatively small (144 page) collection of poems in five sections – moving from what the f**ck through to life is still f**king beautiful. Subtle it is not.

Many of the poems are obvious selections – and have appeared in plenty of other anthologies over the years – the book starts with Larkin’s this be the verse and follows with an excerpt from Macbeth. The range is reasonably broad – alongside Byron, Dickinson & Eliot, we get Hollie McNish, Lemn Sissay and Kate Tempest.

Once you get part the attention grabbing title, it’s a good introduction to a wide variety of poets and poetry styles and has some justifiably well-known and revered poems in it.

One criticism is that there is an awful lot of space between each poem – as an example, one stanza from Shelley’s The Mask of Anarchy gets two pages for five lines of poetry. Mind you they are brilliant – and with the latest revelations of what senior members of the Conservative party have been up to since they came to power in 2010 they are particularly appropriate for me to share today;

Rise like Lions after slumber
In unvanquishable number,
Shake your chains to earth like dew
Which in sleep had fallen on you –
Ye are many – they are few.

Despite this criticism of the book’s layout, Poems for a World Gone to Sh*t , like all anthologies opens the reader up to poets who they wouldn’t otherwise read, and has a good mix of subjects – ranging from rage to joy. Hopefully the title, marketing, and seasonal placement in bookshops will have introduced poetry to people who would not normally read it.

It’s worth considering getting a copy if you have a recalcitrant non-poetry lover in your household. Leave it on a side table somewhere, or in a bathroom maybe – I suppose with its title this is the most appropriate place to put it! Who knows – this book might just be what is needed as the starting point for some much-needed poetry conversion therapy. Your non-poetry lover may well be reading The Waste Land a couple of months later!

I still pick it up from time to time – with the world the way it is at the moment, most of the poems are as relevant now as they were when the book was published, and when they were originally written.

As for poetry anthologies generally, which ones do you rate? Which do you give to non poetry-loving friends? Let me know in the comments.

I’ll finish with one of the more optimistic poems in the book – by Robert Louis Stevenson – one of those writers whose poetry can get missed in the clamour for what’s new.

The lights from the parlour and kitchen shone out
Through the blinds and the windows and bars;
And high overhead and moving about,
There were thousands of millions of stars.
There ne’er were such thousands of leaves on a tree,
Nor of people in church or the park,
As the crowds of the stars that looked down upon me,
And that glittered and winked in the dark.

The Dog and the Plough, and the Hunter and all,
And the star of the sailor, and Mars,
These shone in the sky, and the pail by the wall
Would be half full of water and stars.
They saw me at last, and they chased me with cries,
And they soon had me packed into bed;
But the glory kept shining and bright in my eyes,
And the stars going round in my head.