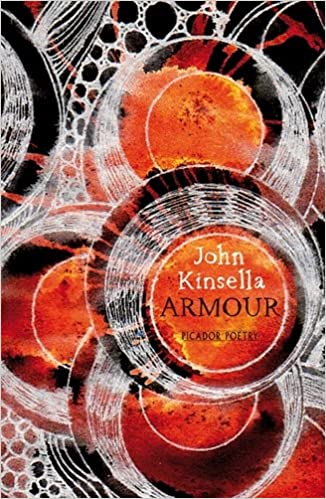 The Australian poet, John Kinsella, has written over thirty books. I only have Armour, which was published in the UK by Picador on 2011. My copy arrived as part of the Poetry Book Society membership I had at the time. The back blurb states that Armour is a beautifully various work, one of sharp ecological and social critique – but also one of meticulous invocation and quiet astonishment, whose atmosphere will haunt the reader long after they close the book.

Many of these poems are of rural Australian life, of man’s interaction with nature. They speak of environmental change, but not in an in-your-face polemical way. The first part of Easterlies, a three poem sequence, reads;

We fear the brouhaha of mood
and tones of inaction, to decamp,
to extract myths from country
and myths hard let go from reading

a vicarious sense of being,
of having come from wherever
myths implant. Dust stings.
We are blinded by howlers.

To call upwind
is to singe lips and perish,
no matter how loving
your speech:

we must hope,
fire-risk, a cold lunch
read on the table.
Grit in our mouths. Fire.

When writing about nature, Kinsella often uses scientific terms – as an example, Owl, which as with the excerpt above comes from Armour ;

Massive owl in redgum surprised
in heavy moonlight by my passing:
a barn or boobook, quite different
though even a grey-white glow
could not illuminate identity.

So I went back to the place today;
a thin dead branch, not much more than a twig,
that took your eerie weight, phantom bird.
And below, an answer. A component
of the algorithm: a freshly dug mousehole.

A vengeful or indifferent or hungry bird
perched in calculation? Whatever the answer,
I went again tonight to see if your hunting
took you there: opportunistic or logical.
And clouds sweeping over the harsh moon,

what weight their stains would bear.
But you were not there; and why should you be?
It’s spring and the mice are opening gateways
everywhere: a vast burrowing and surfacing,
the small weight of their bodies adding up.

I found a critique of the language online – you can read it here;

I can see where the writer is coming from, but my take is slightly different – I suspect that this is partially about a conscious rejection of anthropromorphic language, and about trying to root the poetry into something more solid, more calculated, a different kind of real. Having said this, some of these lines do jump out -‘A component of the algorithm’ , ‘perched in calculation’ , ‘opportunistic or logical’. But maybe that’s the point?

There are poems of family – such as Yellow , a brilliant poem that starts off with his son coming home from school angry because he has been put into ‘Yellow Faction’ that catches alight in a completely different direction (you’ll have to buy the book to find out!), and three poems about different kinds of armour – a knight’s suit, a metal horse, and Durer’s drawing of a Rhinoceros.

There is also an Elegy for Dave McComb, the singer of Perth-based band The Triffids, who died far too young (aged 36). The Triffids were a highly regarded band that failed to get the breakthrough they deserved. McComb’s writing often encapsulated the space and dust of Western Australia, particularly in Born Sandy Devotional, probably their best album, although Calenture runs it close.

Anyway, I digress. an Elegy ends with the following four stanzas;

Staving off inevitables,
we watch from ashen tables,
sing higher than Norfolk pines,
this gifting us, this turning

inside out, an aubade
to sunset, horizon’s loud
cicatrice, as soothing as a road
torn wide open:

travel jars the mind
and that’s the sign
of the times, the crowd
standing still in flight,

to look out on morning:
good morning, good morning:
and I am reminded
how to know, to listen.

Within this poem there are references to McComb’s music, which you would not get unless you were a fan of The Triffids, the Black-eyed Susans or McComb’s later solo work. I’m sure there are plenty of other references in other poems that I haven’t picked up on – including those where scientific language has been used, as a counterpoint to the comments by Charles Whalley in the post I shared earlier.

As for why I pick up this book fairly often? I took Armour on a family holiday to France. I was going through a pretty challenging time, but whenever I sat down with it I was transported to another place on the other side of the world, that I have never visited, and probably never now will. Perhaps that’s why I keep going back to it.

I didn’t manage to travel as much as I wanted to when I was younger, getting caught up in work, a career and everything else that goes around it. Perhaps that’s why I’ve always been a sucker for poetry, and music, that evokes a certain place.

You can find Armour at Bookshop.org – it’s on my poetry bookshelf with other books I rate, including some previously written about and others that I have yet to comment on.

I hope you’ve enjoyed this blog post. Any comments appreciated!

I’ll finish, why not, with a link to one of The Triffid’s best songs;