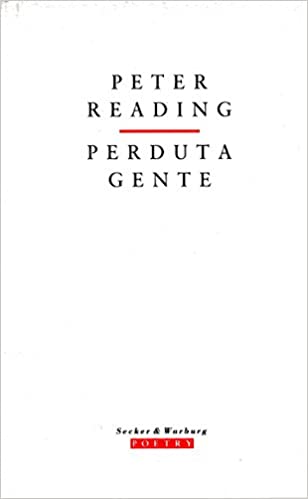 1989. The year the wall came down. Tiananmen Square. Exxon Valdez. A year bookended by George HW Bush becoming president and Ceausescu being deposed. I remember watching the latter in my grandmother’s house in Portchester Road, as we went there most Christmases. Such. A. Long. Time. Ago. So much has changed. Yet so much hasn’t.

Today’s book from my bookshelf is a case in point. Published in 1989, Peter Reading’s Perduta Gente, with its’ central theme of homelessness is as relevant today as it was then. Perhaps more so, after forty years of the sham of trickle-down economics, and the last ten years of austerity. Even after the magical thinking and ridiculous economic self-harm of Brexit, the UK is still the sixth richest country in the world.

I’m not going to try and understand why people vote the way they do. I’m sure that many who vote Conservative are compassionate, caring and kind individuals. However, as Reading states;

Don’t think it couldn’t be you –
bankrupt, batty, bereft,
huddle of papers and rags in a cardboard
spin-drier carton,
bottle-bank cocktails and Snow soporifics,
meths analgesics,
beg-bucket rattler, no-hope no-homer,
squatter in rat-pits,
busker in underground bogs
(plangent the harp-twang, the Hwaet!
Haggard, the youthful and handsome whom I
loved in my nonage;
vanished, the vigour I valued;
roof-tree and cooking-hearth, sacked).
Bankrupt, batty, bereft –
don’t think it couldn’t be you.

Peter Reading was born in Liverpool in 1946, and was educated at the Liverpool College of Art. After graduating he taught for a few years before obtaining a job as a weighbridge operator at an animal feed mill in Shropshire – where he remained for 22 years until he was sacked for refusing to wear a uniform when a new owner took over. He liked the work because he said that it gave him time to think.

He was a prodigious poet – writing a total of 26 collections. These collections were unusual because they were fashioned more like novels with themes and plots and often featured: characters, newspaper cuttings, letters, found poems, crossings out, different type-faces and pieces of prose. The poems that did appear were often untitled. He once said: ‘The concision of poetry appeals to me, but the novelist’s job – big-scale serious tackling of things, as in Dickens and Smollett – is something I try in a smaller way to get into what I do.’

Perduta Gente is filled with anger, power and compassion. As with his other work, it’s a mix of untitled poems, prose pieces, snippets, collages of newspaper clippings and headlines, and handwritten diary entries;

Some of the poems are written in the vernacular of the street, or at least in Reading’s interpretation of it. I think this is a way to try and bring their voices and experiences to life.

I’m not sure how well they work, compared to some of the others here, but they broaden the scope and language in what is a relatively short collection.

Incidentally there are no page numbers in Perduta Gente. It is a book that is not meant to be read in any particular order. You dip in and out. It is unstructured, rootless, a collision of styles and formatting. Which fits well with the subject matter.

One thing I have tried to do with my weekly blog posts is illustrate the sheer range of poetry available. I know a lot of people who say they don’t ‘get’ poetry, it doesn’t speak to them. My reply is that they just haven’t found the right poet yet. As for Perduta Gente, It’s safe to say that if you are looking for gentle, easy reading, lyrical poetry, then this isn’t the book for you.

Newspaper, wrapped round the torso between the
fourth and fifth jerseys
(night attire proper for doing a skipper in
icy December
under the Festival Hall),
carries a note to the Editor, from ‘Ex-
Soldier’ of Telford,
outlining plans to withdraw
DHSS cash from those
no-fixed-abode parasites.

Wound round a varicose indigo swollen
leg, between second
and third pair of trousers (which stink –
urine and faeces and sick),
Property Pages delineate bijou
River-View Flatlets
£600,000 each.

The house prices may have increased, but so has homelessness. Where is the anger? Why are we so accepting of this?

Perduta Gente is out of print, so if you want a copy you’ll have to pick one up secondhand. You won’t find it on my bookshop.org page.

You can, however, listen to an audio recording of Perduta Gente here;

What do you think? Do you prefer poetry that is less angry, less politicised (in the small ‘p’ sense of the world), and conservative (in the small ‘c’ sense)!. Or should there be more writing like Perduta Gente being published now? How does what you’ve read here compare to the contemporary poetry you see in magazines, online publications and new collections and anthologies?

And for those of us who write poetry. Do we take enough risks with our own writing, with the subject matter, language used or poetic form and structure? What if we don’t want to? Does it actually matter? Can it actually achieve anything? Maybe that’s something for a future post.