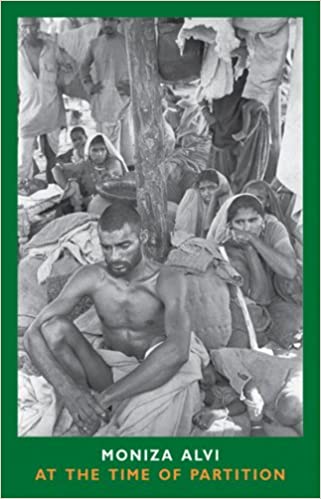 I own two of Moniza Alvi’s seven collections, Europa and At the Time of Partition.

Many of the poems in Europa, (published in 2008), relate to ancient and modern traumas, including enforced exile, alienation, rape and honour killing. It’s centre-piece is a re-imagining of the story of the rape of Europa by Jupiter as a bull, whereas At The Time of Partition (2013) is a book length poem set at the time of partition between India and Pakistan. These are obviously weighty and serious subjects, but there is a lightness of touch and clarity of language which makes them both accessible and readable.

Not all of her poems are about such issues. One of her most well-known earlier pieces is as follows;

I would like to be a dot in a painting by Miro.

Barely distinguishable from other dots,
it’s true, but quite uniquely placed.
And from my dark centre

I’d survey the beauty of the linescape
and wonder — would it be worthwhile
to roll myself towards the lemon stripe,
Centrally poised, and push my curves
against its edge, to give myself
a little attention?

But it’s fine where I am.
I’ll never make out what’s going on
around me, and that’s the joy of it.

The fact that I’m not a perfect circle
makes me more interesting in this world.People will stare forever —

Even the most unemotional get excited.
So here I am, on the edge of animation,
a dream, a dance,a fantastic construction,

A child’s adventure.
And nothing in this tawny sky
can get too close, or move too far away.

Born in Pakistan, Alvi grew up in Hertfordshire. She is a freelance tutor and writer living in London, who often runs courses for the Poetry School. I’ve never taken one of them, though perhaps with my current rate of poetry acceptances I should!. I have only heard excellent things about them. Follow the below link for details.

As for her own poetry, in the Poetry Book Society bulletin, Kathleen Jamie and Hugo Williams stated that…Alvi’s voice has achieved a relaxed naturalness, a fluidity which allows her to present these delicious, extraordinary poems as though it were easy.

The central poem in Europa , in 25 different segments is superbly written. There is an excellent article on this particular sequence from the Guardian, published back in 2009

The Guardian article shares a few of the segments. It’s a powerful poem that builds with significant narrative pace. Alvi’s use of line breaks and the segmentation of the poem is particularly effective in both separating each element and building the tension and momentum.

As for At The Time of Partition, it uses a similar fragmentary approach, as in this sequence which I have taken from the Poem Hunter website – I hope it is OK to reproduce here (I only share poems or significant parts of poems that have previously been shared online).

Take notice of the precise language, imagery and line-breaks. None of this is showy, none of it is overwrought;

Ever after
she heard it as an echo

in her inner ear, disembodied,
as, in a sense, all voices are –

We’ll take him, Shakira.He can travel with us.

You’ve enough on your hands
with the other four.

There are places still
on the second bus, inshallah!

At that swollen moment
there was a shadowy unburdening
because at that time, perhaps
any child was a burden.

How she would wish
as the weeks and the months

and the lifetimes churned on
to undo Take him,

to force back the heavy, rusted
hands of the clock –

Say your goodbyes, ticked the clock.
No time to lose.

But who was left for goodbyes –
her Hindu friends, the friends of friends?

A stream drying up.

How to say it?

It was hard to sit on a cane-seated chair
on her old verandah and sip tea,

the conversation curdling
like milk for the weekly paneer.

Tomorrow we will be gone.

weighing much the same.

Was the worst goodbye to the house?

The house was her second skin,
hardier than her first,

an island in the deafening, tumultuous sea.

She was married to its daily rhythms –
the kneading, the sweeping, the praying . . .

Under duress,
it was dauntingly calm.

And Ludhiana itself, the Old City
and the New –

the Civil Lines with their flowering trees.
The Christian Medical Hospital.

The cloth factories and the temples.
The neighbourliness of the lanes. Her lanes.

for a final goodbye –

as, they would gather and wait
appear whole

Nothing was wrong with the clock.
The clock ticked on.

There’s an audio recording also available at the above link.

You can also hear Alvi read her poems here;

This is a 48 minute reading, which includes a recital of the first poem I have shared in this post, I would like to be a dot in a painting by Miro.

What more is there to say? This is beautiful written poetry that speaks of fragmentations of society and disparate connections, of loss and despair, but also of redemption, of finding a way. It’s not surprising that both Europa and At the Time of Partition were nominated for the TS Eliot prize.

Both these books are as relevant in subject matter now as they were when they were written, and both repay repeat readings. Highly recommended.

You can buy them direct from the publisher, (Bloodeaxe), or of course from my Poetry Bookshelf at Bookshop.org here: https://uk.bookshop.org/lists/my-poetry-bookshelf