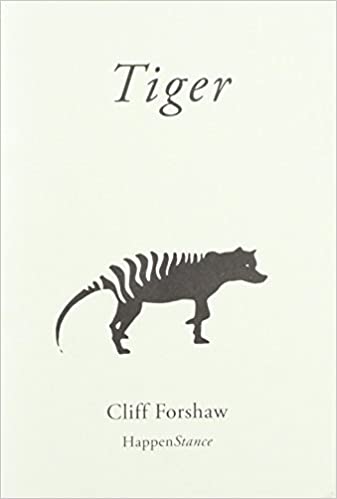 In addition to books on my poetry bookshelf, I also have a lot of pamphlets, including this one by Cliff Forshaw, published by Happenstance Press in 2011.

Pamphlets are a great way for poets who haven’t had a collection in print to pull together an initial selection of work, or for other writers to create a smaller thematic collection of poems.

Tiger falls into the latter category. It is 22 pages long, and themed around the now-extinct Tasmanian Tiger. I ordered this, partly due to an interest in the subject, and also due to wanting to see what the Happenstance Press publications were like, since I was planning on submitting a pamphlet’s work of work myself.

This, like the other Happenstance press pamphlets I own, (I haven’t ordered any for some time, but will do at some point when funds permit), is very elegantly put together, with a crisp and clean layout.

Tiger comes out of a writer-in-residence period in Hobart in 2004, (memo to self to check whether the Tasmanian Writers Centre are still offering these!), and starts with the following poem;

Loop
62 seconds of the extinct Thylacine or Tasmanian Tiger on film.

Within the box, it growls, it twists,
scowls through its repertoire of tricks,
ignores the camera — or gurns up close, turns
again, to flop, to gnaw that paw-trapped bone.

It paces out its trap of light; one hundred reps
while hindquarters zither bars of sun;
claws cage’s mesh, hangs stretched
as if to take the measure of itself.

You saw. You see. And what we’ve got is what was shot:
short clips, fragments caught and stitched
together in a loop of black and white.

You can watch Forshaw introducing and reading the poem on YouTube, shared by The Poetry Archive, through the following link;

There’s also a Guardian article which goes into this particular poem in detail here;

and you can watch the clip that inspired Loop here;

It’s one of the strongest poems in the pamphlet, and the one that has been shared the most online – presumably as a result of the Guardian choosing it as one of their poems of the week.

The second poem, Barcode, brings us up to date with the Tasmanian Tiger’s contemporary relevance;

Extinct, this creature’s everywhere
from CD sleeves to bottled beer.
With trademark stripes, it zebras out
between the gums’ abstracted light.
They’ve even tigered my hired Mazda’s plate.
Everything’s branded. Tasmania – your natural state.

Now you see them. Now they’re gone.
Did this tiger’s go-faster stripes
aid recognition in the loping pack?

Eucalypts, eucalypts at speed,
late sun flickers through those trees:
at the tarmac’s edge, off-cuts of fur, strange weeds.

I’ll not reproduce anything else from Tiger, as it is still available for sale from Happenstance Press here;

The other poems, also mostly in the form of sonnets, expand on the themes of man’s interaction with this now mythical ghost of an animal. There are poems about museum specimens, roadkill, shadows glimpsed beyond headlights, and a jaunty final poem which connects the Tiger with another long-dead Tasmanian, actor Errol Flynn – I’m not 100% sure about this last poem – I can understand the desire to lighten the sequence, but I wonder about how it fits with the rest of the poems. But that’s a minor quibble and more a reflection on my personal taste.

Both Barcode and Loop , which have been shared elsewhere online, are also available in Vandemonian, a full length collection about the inhabitants of Van Diemen’s Land, (an earlier name for Tasmania), which was published by Arc in 2013. I don’t own it yet.

For more detail on Cliff Forshaw and his work (he is both a writer and painter), go to http://www.cliff-forshaw.co.uk

As for Happenstance, you can see their current range of collections here;

You’ll not see anything from me there – my submission was, rightly, rejected. It was disjointed and simply not good enough. Most of the poems I submitted needed serious editing, and that’s being kind. Only one, (Bird in Hand – which you can find elsewhere in this blog), made it into my first collection.

But what I did receive from Helena Nelson, who owns and runs Happenstance Press, was a very thoughtful and detailed rejection letter, with notes on most of the poems I had submitted. She summarised by saying that there ‘was something there’ with my writing, but I was ‘trying too hard’.

If you happen to stumble across my blog Helena, then thank you. Your rejection letter had a lot of influence on a writer who was still trying to find a voice, even back in 2011/12.

And that brings me to my final point. Poetry publishers need support. They need people to buy books, pamphlets and magazines. Without this they cease to exist. So if you haven’t bought any books for a while, or subscribed to a magazine, then please bear this in mind! Small-press independent publishers of poetry in particular need our support right now.