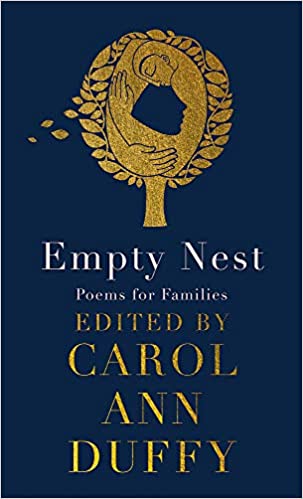 My youngest child was 18 at the end of last week. Today is Father’s Day. Both events have prompted me to revisit this collection of poems for families, edited by Carol Ann Duffy, which I was given as a present earlier this year.

As with all good anthologies it includes a wide range of poems from across the centuries, that are as relevant now as they were when they were written – Here’s one from Charles Kingsley, writing in the mid-19th century

My fairest child, I have no song to give you;
No lark could pipe in skies so dull and grey;
Yet, if you will, one quiet hint I’ll leave you,
For every day.

I’ll tell you how to sing a clearer carol
Thank lark who hails the dawn on breezy down;
To earn yourself a purer poet’s laurel
Thank Shakespeare’s crown.

Be good, sweet maid, and let who can be clever;
Do noble things, not dream them, all day long;
And so make Life, Death and that last for ever,
One grand west song.

Personal highlights include two lovely poems written by Jackie Kay to her son – Gap Year and Piano 4pm, which make me want to buy her Bloodeaxe selected poems, and stunning Eavan Boland contributions including The Pomegranate, which starts as follows;

The only legend I have ever loves is
the story of a daughter lost in hell.
And found and rescued there.

Poems on letting go feature strongly as you would expect, such as Walking Away by Cecil Day Lewis, written for his son Sean, which if you don’t already know it starts with the following stanza;

It is eighteen years ago, almost to the day –
A sunny day with the leaves just turning,
The touch-lines new-ruled – since I watched you play
Your first game of football, then, like a satellite
Wrenched from its orbit, go drifting away

and ends with these lines:-

How selfhood begins with a walking away,
And love is proved in the letting go.

Or Stephen Spender’s To My Daughter

Bright clasp of her whole hand around my finger,
My daughter, as we walk together now.
All my life I’ll feel a ring invisibly
Circle the bone with shining when she is grown
Far from today as her eye are already.

But this isn’t just a book of parental reminiscence, there are poems written for parents – Charles Causley’s Eden Rock makes an appearance, as does Yvonne Reddick’s witty Things My Father Told Me, there are poems for lost children, such as Sharon Olds’ devastating To Our Miscarried One, Age Thirty Now and William Stafford’s For a Lost Child which finishes with the lines;

I found your note left from a trip that year
our family travelled: ‘Daddy, we could meet here’.

We are all changed by parenthood, and I know that when my son leaves for university in a couple of months time it is going to hit me hard. As W.S Merwin writes in Separation (this is the full poem so I hope it’s OK to share it here);

Your absence has gone through me
Like thread through a needle.
Everything I do is stitched with its colour.

Back to Empty Nest. This really is an excellent collection of poems, suitable for poets or non- poets alike. It’s widely available, including on Bookshop.org here;

The last poem in the book is Shard, by Ella Duffy, (Carl Ann Duffy’s daughter) which ends

You danced on the road, blowing kisses,
giddy with seeing me,

your daughter, blinking my small light
down on the city;

the space between us swollen
and homesick, a mile long.

After the last year and a half, the poignancy of words like this comes into even sharper view.