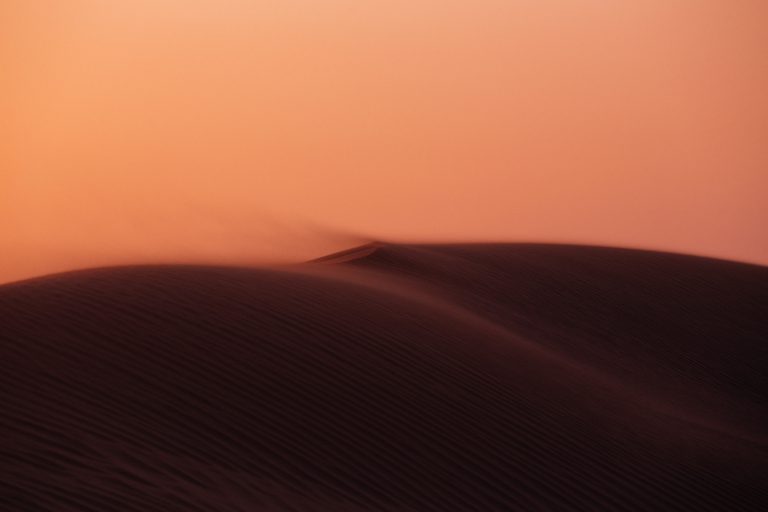 Apparently a sandstorm is on its way to the UK from the Sahara. Storm Celia is expected to hit southern Britain later today or tomorrow. This news reminded me of a prose piece I wrote a few years ago, following a similar event. It’s part of a pamphlet / book length sequence of flash fiction / prose poems which I am hoping to publish later this year, or early next.

This is the only place it’s appeared so far – I hope you like it.

The photograph that accompanies this post was by Mike Tonissoo on Unsplash (it’s actually from the UAE, but it fits the theme).

Not Keeping Your Distance

There was that one time when a weather front came straight in from the Sahara. Not one of the normal Atlantic storms, or something warm from the Azores.  This was a blast of hot air; flowers wilted, our throats were scorched.  When it rained, everything was covered in a layer of pink dust.

Driving was a nightmare. Windscreen wipers jammed, their motors seized up by so many tiny particles of sand. Brake pads coated were less effective, leading to scores of minor incidents as stopping distances increased. On the M27 some prat in a silver Audi took no notice and tailgated into the back of a slowing queue of traffic. Rubberneckers snarled the eastbound carriageway to a crawl for three hours as the debris was cleared.

Back in the city we all tried to carry on, do the best we could under the circumstances. The sky glowered. The Day of Reckoning. Isiah 10.3. – that’s how the city centre preachers called it, out in force down Commercial Road.  This was the time when they were finally going to be proved right. We ignored them of course, just as we cold-shouldered the Big Issue sellers and stepped over all of the rough sleepers, avoiding their gaze.

Two days in and people started panic buying multi-packs of cheap lager. Sales of vodka went through the roof; typical Pompey – it might be the apocalypse but we’re still going to get pissed.  By now  no – one was driving anywhere. The council couldn’t clear the roads. We all hunkered down, waiting for redemption.

Out for a walk late on the third day, alone in this island city of two hundred thousand people, the sand had deadened everything – light, sound, joy, hope.  On the way back to our house, I wrote the name of somebody I had once loved across the first of the windscreens in my street, saying goodbye before moving on to the next car.

Two hours later the wind shifted, picked up. In from the Atlantic, grey clouds threw torrential rain, spraying everything with new-found light. Everyone ran into the street, as if it were a miracle.  We danced until we were soaked, shivering in the dark.  Looking back, I still can’t remember the last time I saw you so happy.

Next morning, finding a small pile of African sand by the side of one of the cars in our street, I tried to recall the melancholy I had written here a few hours before. But the windscreen gleamed, was too hot to touch, as if all that was left was still not yet lost.