A quick post today to share a recording of the Dempsey & Windle hosted Shakespeare’s Birthday Party from (of course) April 23rd. There’s a really nice mix of voices and poems.

I’m in there with a piece about Shakespeare and football. 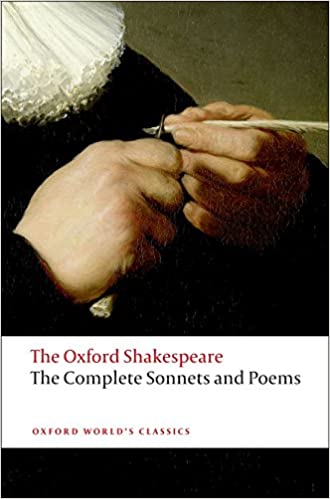 Anyone reading these poetry bookshelf posts will have seen that I haven’t, as yet, written much about any of the canonical poets, those who everyone says are the best, the most important, those you must read to get a proper understanding of poetry.

The truth is I’m a little intimidated about doing so. I know that it will expose my lack of reading, my lack of education (I only took English to O Level at school – as part of a misguided career plan to become a surveyor). I have therefore, never properly studied literature, and so have huge gaps in my literary knowledge.

I could, in theory, study for a masters degree, since I eventually got a BA in Humanities, focussing on History or Geography, but due to government funding cuts for higher education that avenue is no longer open to me. I don’t have a spare £10K lying around that I could use for this purpose.

Whilst it’s not a huge issue for me personally, it’s worth thinking about all those other people whose life choices have been shrunk because of this. Not just in literature, but in music, theatre, art. The last ten years of Conservative Party led austerity has been at the expense of the opportunities for so many people to learn new skills, to open their minds to different ideas and experiences, whether for career or pleasure. But we all know that by now.

As an aside, I have to assume that anyone who votes Conservative is perfectly happy with this, as they no doubt must be with austerity policies in general. Still at least the national debt has been reduced significantly since 2010 (allowing for Covid of course). Oh wait.

Anyway, enough of the rant. Back to Shakespeare. I bought this book because I am reading at an event celebrating his birthday next week, and I wanted to choose a suitable poem or sonnet. Apart from the really obvious ones, (Sonnet 18 for example) , I haven’t actually read many of them.

Are they all equally brilliant? Clearly not. But how do we judge what is, and what isn’t good? How much of our assessment is based on our own prejudices, and our own reactions to the previous assessments and criticisms of others? There’s an interesting article on the Poetry International blog which goes into this – it’s about the apparently much unloved Sonnet 145. You can read it here.

How heavy do I journey on the way,
When what I seek (my weary travel’s end)
Doth teach that ease and that repose to say
“Thus far the miles are measured from thy friend.”
The beast that bears me, tired with my woe,
Plods dully on, to bear that weight in me,
As if by some instinct the wretch did know
His rider loved not speed being made from thee.
The bloody spur cannot provoke him on
That sometimes anger thrusts into his hide,
Which heavily he answers with a groan
More sharp to me than spurring to his side,
For that same groan doth put this in my mind:
My grief lies onward, and my joy behind.

I picked this sonnet because of my own ambivalence towards Shakespeare whilst growing up – we were taken to see some of the plays from quite a young age, usually RSC productions, either at Stratford or the Barbican. I can’t remember much about the ones I saw, though I’m sure this has no reflection on their quality. But I associated going to the theatre with the disintegration of my parents’ marriage. Looking back I’m pretty convinced that it was subconsciously also the reason I chose to take A level Maths , (which I failed), instead of English.

A good few years ago I wrote a haiku which appeared in Orbis Magazine;

deceit and hubris
lead to lengthening speeches
everybody dies

Obviously the whole poem is a joke – haiku’s don’t have titles and my parents never took me to see Macbeth, nor any Japanese film versions of it, but there are undercurrents of truth – about family break-ups, about how we are sometimes blindsided by our own interests and passions to what others want, and how we can over promote something to the point that it can have the opposite effect on those we are trying to share it with.

I suspect this is why my wife doesn’t appreciate Portsmouth FC, Tangerine Dream’s challenging early 70s music, or for that matter the complete back catalogue of Black Sabbath. Though as I sit here listening to Iron Man on this sunny spring morning, I do believe there is still time for her to change her mind.

I think this may well be the first poetry blog post about Shakespeare that also references Black Sabbath. If you know of any others please do let me know!

As it happens I found my own way back to Shakespeare through Akira Kurosawa. I saw the incredible Ran, (his version of King Lear), at a near-empty cinema in the West End of London shortly after it came out. It’s a mind-blowing film that is really worth watching on the big screen if you ever get the chance. There’s a good review in the Guardian of the 4K restoration that came out in 2016. It’s one of my favourite films.

And here’s the official trailer for the film;

Anyway, back to Shakespeare. Sonnet 50 is one of a pair. Sonnet 51 reads as follows;

Thus can my love excuse the slow offence
Of my dull bearer, when from thee I speed:
‘From where thou art, why should I haste me thence?
Till I return, of posting is no need.’
O what excuse will my poor beast then find
When swift extremity can seem but slow?
Then should I spur, though mounted on the wind:
In winged speed no motion shall I know.
Then can no horse with my desire keep pace;
Therefore desire (of perfect’st love being made)
Shall weigh no dull flesh in his fiery race,
But love, for love, thus shall excuse my jade:
‘Since from thee going he went wilful slow,
Towards thee I’ll run and give him leave to go.’

Obviously both poems are about leaving and returning to a lover, but there’s much more to them than that. You can read far more detailed analyses of these poems elsewhere – far more detailed than you are going to get from my ramblings at any point!

The Oxford Shakespeare The Complete Sonnets and Poems does have notes on each sonnet, helpfully shown on the page opposite that of the sonnet itself, along with a 158 page introduction, so this may be all you need, but if you are after something shorter, about say a particular sonnet, then there are plenty available online.

As a starting point should you be interested in finding out more, here are a couple of short ones for each sonnet. There may well be better analyses out there, but these also give suggestions for further reading.

I have come to appreciate Shakespeare’s work far more than I did when I was younger. Maybe I just needed time, to go on my own journey. What about you? As for the sonnets themselves, what do you think of them? Do you have a favourite? I’m still reading through them so any suggestions would be very much appreciated.

Please let me know in the comments.

Actually the same applies to Black Sabbath, Tangerine Dream and the films of Akira Kurosawa. We are all still learning, there’s always something new to see, to listen to, something we have somehow missed. Last week I listened to Tangerine Dream’s Atem, which is a sonic exploration of the history of the Earth in reverse. It’s the album before their most well-known work – Phaedra – and so despite being championed by John Peel on it’s release in 1973, tends to be ignored today. I thought it was brilliant.

I hope you’ve enjoyed this rambling blog post. Most of the books mentioned in My Poetry Bookshelf are available on Bookshop.org – I have a page where they are all saved. If you do buy anything from this page then I’ll make a small amount of commission from each purchase, which goes towards the running costs of this blog. Last time I checked I had made £6.30 in total, so it’s hardly making me rich, but it all helps!