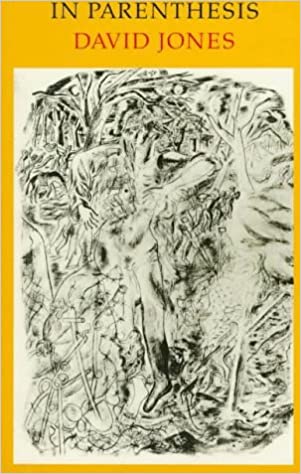 When people think of poetry from the First World War, they tend to think of Owen, Sassoon, Rosenberg. Few think of David Jones. Yet when In Parenthesis was published in 1937, WH Auden described it as “The greatest book about the First World War” and TS Eliot called it “A Masterpiece”.

In Parenthesis is in 7 parts and 187 pages long, with 30 additional pages of notes and references. It’s hard to categorise – poetry? prose poetry? prose? and isn’t exactly the easiest book to read – weaving Jones’ own experiences as a soldier at the Somme (he fought with a London battalion of the Welch Fusiliers), with Celtic, Arthurian, Roman and Greek myths and legends.

In his review for the Guardian, Owen Sheers says that “In Parenthesis works at the level of poetry, yet isn’t verse, nor, I’d argue, a poem. Multiple narrative possibilities are deployed throughout, fragmented lyricism giving way to sections of prose, dialogue, stream of consciousness, slang and song. The flow between these modes and registers never feels anything less than organic, and yet the work is built upon a parenthetical structure of mathematical precision; a subterranean architecture of image, pace and movement that provides a governing background rhythm to the multiple transitions of voice, perspective and cadence.”

.Susan Salter Reynolds in the Los Angeles Times describes In Parenthesis as.”[A]n extraordinary prose-poem….Jones wrote in the tradition of James Joyce, T.S. Eliot (his greatest supporter) and Ezra Pound. His net of references to the pagan and secular, Roman and Celtic history makes him one of the last of his writerly kind, one foot in the empirical world, the other in the world of faeries and spirits….Jones was also an accomplished painter; his writing draws on this sensibility to create textures, smells and images, describing the feeling of fatigue, of marching four abreast for 12 straight hours, of sleeping standing up in the rain, or a camp in the pitch dark….A reader feels, like the soldiers, a sense of being able to see only as far as the next man, of not knowing why you are there or where you are going.”

The book follows John Ball (according to one review the name references a radical priest from the Peasants Revolt) from embarkation at Southampton to the final battle, an assault on Mametz Wood (which Jones himself fought in). There may be some truth in this – Jones’ Catholic faith heavily influences is writing, and there is much in the book about the lives and losses of the ordinary soldier, and the links in experience between these men and those from other, earlier conflicts. Jones also writes of the new mechanisation of war, and is acutely aware of the changes in the conduct of conflict from previous wars, and subsequently society in general.

The language can be dense, obtuse, or straightforward and clear. I’ve read it several times and still don’t fully understand many of the references. It is a book that would, I’m sure, reward deep research and analysis. On Goodreads the reviews are mixed. Some describe it as impenetrable. I would disagree. As with all poetry, you don’t have to understand it all. You don’t need to get every metaphor, every association, every reference to a previous work by Shakespeare or Homer to appreciate it.

And while it is described as a book of high modernism, it is heavily rooted in the real-world experiences of Jones and his comrades (and opponents). It is about the men who journeyed to and then died together on the Western Front in 1916. Jones preface states (it appears in capitals in the book hence also appearing in the same format here);

THIS WRITING IS FOR MY FRIENDS IN MIND OF ALL COMMON & HIDDEN MEN AND OF THE SECRET PRINCES AND TO THE MEMORY OF THOSE WITH ME IN THE COVERT AND IN THE OPEN FROM THE BLACKWALL THE BROADWAY THE CAUSEWAY THE CUT THE FLATS THE LEVEL THE ENVIRONS AND THOSE OTHER FROM TRAETH MAWR AND LONG MOUNTAIN THE HENDREF AND YR HAFOD THE PENTRE PANDY AND Y DARREN THE MAELORS THE BOUNDARY WALLS AND NO. 4 WORKING ESPECIALLY PTE. R.A. LEWIS GUNNER FROM NEPORT MONMOUTHSHIRE KILLED IN ACTION IN THE BOE-SINGHE SECTOR N.W OF YPRES SOME TIME IN THE WINTER 1916-17 AND TO THE BEARDED INFANTRY WHO EXCHANGED THEIR LONG LOAVES WITH US AT A SECTOR’S BARRIER AND TO THE ENEMY FRONT-FIGHTERS WHO SHARED OUR PAINS AGAINST WHOM WE FOUND OURSELVES BY MISADVENTURE

It’s the mixing of specific contemporary events and historical myth that I find particularly interesting, along with the use of colloquial language and slang terms. The way it moves between prose and poetry, dialogue and song was also really striking the first time I read In Parenthesis, and showed me a very different type of poetic expression to that which I had read before. From a personal perspective the way that all of this is bound together by a strong, straightforward narrative arc towards the final, chaotic and catastrophic battle at Mametz Wood, ( at which Jones’s battalion alone lost 263 men), made it easy to read (if not fully comprehend!).

The Welsh National Opera performed a specially created opera of In Parenthesis for the 100th anniversary of the battle at Mametz Wood, (11-17 July 1916). David Antrobus, co-librettist was recorded reading several passages from the original book. You should be able to hear them via the following link (I hope!)

This post isn’t meant to be a full review of In Parenthesis. For a work with this level of reverence by writers such as Auden, Eliot, and Stephen Spender, who wrote, (in a book review for the New York Times ), “This work of a poet-painter has its every word chiseled out of experience, and it is probably the World War I monument most likely to survive.” there are longer and more detailed reviews available, such as that by Graeme Fife in Writer’s Review, which I think is good and worth a read.

I’ll finish with this passage from Owen Sheers’ Guardian review;” Perhaps the most considered response came from Herbert Read, an ex‑solider himself, whose reviews of In Parenthesis are shot through not just with admiration, but also a sense of gratitude. “For the first time,” he wrote, “all the realistic sensory experiences of infantrymen have been woven into a pattern which, while retaining all the authentic realism of the event, has the heroic ring which we associate with the old chansons de geste … a book which we can accept as a true record of our suffering and as a work of art in the romantic tradition of Malory and the Mabinogion.””

Ultimately, this is a book about Jones’ own experiences of war, and that of the men he fought with.

I hope you’ve found this post of interest. Like most of the other books I’ll be writing about In Parenthesis is available on my Bookshop.org bookshelf (should you be interested in making a purchase any referral commissions I make will go towards the costs of running this blog)