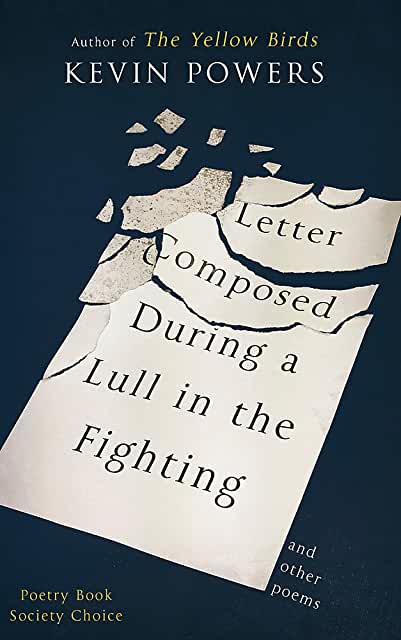 The next recommendation from my poetry bookshelf is Kevin Powers’ Letter Composed During a Lull in the Fighting.

I used to be a member of the Poetry Book Society, (established by TS Eliot in 1953), who for an annual fee will send out their recommended books every few months. It’s a nice way to discover books that you wouldn’t otherwise read, and I may well rejoin at some point. Obviously there will be books you get that don’t appeal, but if nothing else it pushes you out of your comfort zone. Letter Composed During a Lull in the Fighting was one book I received during my time as a member ( a birthday present from my father for a few years, so if you happen to be reading this, thank you!). For more information on the PBS, go to

Back to my book of the week. Kevin Powers is an Iraq war veteran, like Brian Turner, the author of Here, Bullet , another book I have written about in this blog. This book differs from Turner’s work in that whilst there are poems about the experience of fighting in Iraq, there are also plenty about life afterwards, about trying to come to terms with what has happened, about trying to make some sense in the aftermath of such experiences.

In Independence Day he writes;

But I
believed the woman in Ward C of McGuire veterans’
hospital
who told me to dig
my feet into the ground as hard as I
could if I
ever doubted
the firmness of reality.

And I
had practiced digging down
and down into the earth
with my hands
with my elbows
with my body
with my eyes
gone wide, in fact I
have tried to become earth
many times, to be lower than earth, and I
have known many boys
who practiced it so much
that they stayed below the surface.

PTSD and the aftershock of war is a constant theme. For another example, listen to Powers reading his poem After Leaving McGuire Veterans’ Hospital for the Last Time which also appears in the book.

The language is generally straightforward. Some see this as a cause for criticism

One reviewer on Goodreads commented that: It does so much telling and so little showing that I wondered about who his poetry mentors and teachers were. The one thing every poetry teacher/mentor/writer has always pounded into my head it was “show, not tell”.

In her review for the Observer, Kate Kellaway saw it differently, writing;

Powers has a defended voice with every reason under an Iraqi (or sometimes Texan) sun. Deflating endings are a speciality, as if to avoid paying war the compliment of a climax:

… It is night again and endless
are the stars. I can tell you exactly
what I mean. The world has been replaced
by our own ideas about the world.

This flat conclusion is not as exact as all that. More successful in its reductive way is the title poem’s ending about war as “making little pieces of metal/ pass through each other”. The bareness, unrescued by commentary, is typical Powers.

Here’s the poem in full;

Letter Composed During a Lull in the Fighting

I tell her I love her like not killing
or ten minutes of sleep
beneath the low rooftop wall
on which my rifle rests.

I tell her in a letter that will stink,
when she opens it,
of bolt oil and burned powder
and the things it says.

I tell her how Pvt. Bartle says, offhand,
that war is just us
making little pieces of metal
pass through each other.

Andrew Motion in the Guardian ( trying to find easily accessible reviews not behind the paywall tends to limit my options on sources!) wrote as follows;

Its lyrics describe a sparsely populated mental landscape and project a jittery sensibility that is hungry for consolation yet removed from most comforts; they are written in choppy free verse that is at once wired and conversational (sometimes to a fault); the whole effort is impressive in its sincerity and virtually unimpeachable in its distress.

I think the lack of floridity, and generally straightforward, conversational tone gives it an immediacy and authenticity which lends itself to the subject matter, and raw impact of many of the poems. It’s a strong addition to the canon of war poetry, and one worth considering if this is a subject matter that is of interest.

I’ll finish this with a quote by Michael Symmons Roberts on the back of my copy of the book;

Like the best war poets, Kevin Powers’ real subject is not the battle for land or governance, but the battle for one man’s soul. In dramatising that inner conflict, he achieves a poetry both urgent and universal.

You can find Letter Composed During a Lull in the Fighting alongside my other recommended, (and others yet to be written about), books at

My previously written about books (I hesitate to call them reviews) can be found here: