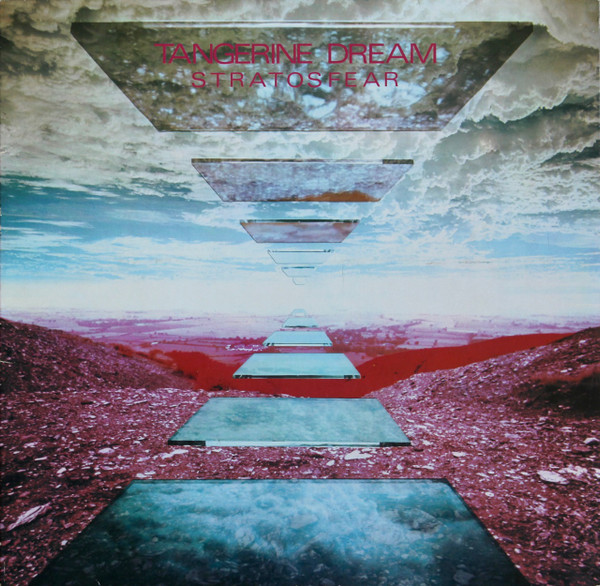 I’ve been listening to a lot of 1970s music this week. On Twitter I follow someone who posts polls each fortnight, asking people to vote for their 5 favourite albums from a particular year. This fortnight people are posting their recommendations from 1976. Most years my decision making is pretty fluid up until the last minute, but this time my choices are pretty much cast in stone. Well, four of them are.

A couple of hard rock classics from Rainbow and Thin Lizzy, behind Stevie Wonder’s masterful Songs From the Key of Life, will occupy places 2-4. But my number one album from ’76 will be Tangerine Dream’s Stratosfear. It was the first album I ever owned. I remember hearing part of it on the radio (we were a BBC Radio 3 family, so it must have been on some crossover show).

Growing up in a house primarily filled with classical music it was so so different.

I’ve listened to Stratosfear several times a year ever since. There have been many times in the last 45 years that the first few chords have transported me back to that moment in my childhood. I can still remember unwrapping it. Opening the gatefold sleeve. Looking in awe at the stunning artwork. Pulling the record out of its’ paper sleeve. The static. The smell of it. Joy. Happiness. A moment in time before our family fell apart.

The signs were there before, but I was too young to properly comprehend what had happened, and understand who, if anyone, was to blame. I spent so many years afterwards, just looking back, just wishing that I had done something different. If you are going through divorce and have children, make sure that they know it wasn’t their fault. Otherwise they may well blame themselves.

This backward-looking, regret filled outlook infected my life for many years. I was afraid of risk. Afraid of things going wrong. Always looking in the rear view mirror rather than looking ahead to where the future might lead. I spent my teenage years and my early twenties running away. But eventually I learnt to live with my past, if not move on from it completely.

I’ve got Stratosfear on right now. It’s a brilliant album, up there with Phaedra, Ricochet and Rubycon as one of Tangerine Dream’s best from their 70s peak. I’m also looking forward to seeing the latest TD lineup in Southampton at the end of March (as a band who were formed in the 1960s and have recorded over 100 albums it’s changed a bit over time). It’s the first time I will be seeing them live, and I don’t have any concerns about how this might affect me. I’m at a point now where I can just listen to it as a piece of music, and not sink into the emotions that I felt all those years ago.

There are four tracks on the album; Stratosfear, The Big Sleep in Search of Hades, 3 AM at the Border of the Marsh from Okenfenokee, and Invisible Limits. Each works independently, as well as being a part of a greater whole. As with much of Tangerine Dream’s work, some of these tracks have been sampled – Invisible Limits was sampled in DJ Shadow’s Changeling (Transmission 1). You’ll have to skip to 5 minutes and 15 seconds to get to the sample.

In some ways I wonder if this is what we all do when we listen to music. Pick up different parts of the melody or beat, different aspects of the lyrics, feel it in different ways. Interpret it, reinterpret it with our own reminiscing, our own thoughts, personal dynamic and state of mind at that particular moment in time.

I’ve written plenty of poems that reflect on, and reference music, whether by Tangerine Dream or other artists. Anyone who has read this blog for some time will realise how central music is to my life. I don’t think I could exist without it. What about you?

Over the last few years I’ve been writing a sequence of flash fiction / prose pieces that thread music, childhood and car travel together as central themes. Four of the tracks are named after the song titles in this album. The sequence isn’t complete yet, but it’s not that far off. A few have been published in online and print magazines, including the one that ends this (rather self focussed!) blog post. It first appeared in a Dempsey & Windle competition anthology back in 2020.

It is currently the final piece in the sequence. Maybe it says something about the journey I have been on since 1976, and the place I am at now.

NB. for those who don’t know, Edgar Froese was one of the founders of Tangerine Dream. He died in 2015.

It is a place like so many I have imagined. Where fog becomes mist becomes half-shadows becomes something almost recognisable.

A road like every other. In this darkness I can set my own horizon can see a single unbroken line stretching out and meeting it where land and water and air melt into one. This.

Is a road arrowing straight without distractions, without potholes, without bends, without anything to get in the way of singular movement. But no. Slow down. Stop. Open the car door and step out.

Into night. Wait for the engine’s fan to cut out, for the blood to still in your ears, for your heartbeat to settle into the rhythm of this place.

Step off the road. Listen to the sound of your footsteps until they are muffled by earth, then mud. Listen to the reeds kissing in the breeze. Slip off your shirt. Slide down into the silt. Feel.

How it nestles in the crook of your back, cossets your shoulders, strokes the nape of your neck. Remember.

The sky is always clear on a night like this. So lie down. Rest a while. See how many stars you can touch before drowsiness takes hold. I have.

Known this place all my life. Despite everything, it has always been there. Waiting. Within reach.