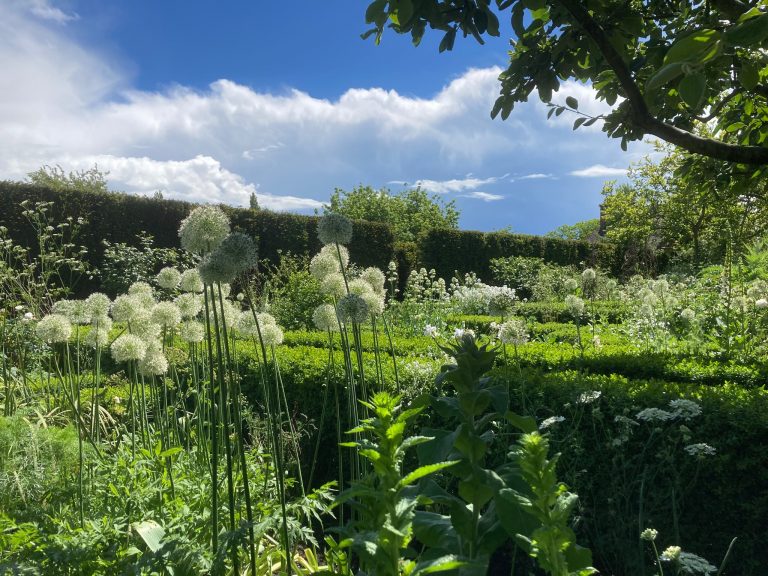 Back from a few days holiday – my first break since starting a new job in October. I needed it. Whilst the new role is great (it’s amazing how feeling valued at work improves both your productivity and mental well-being!) I was getting tired, and starting to struggle a little. I’m currently recruiting in the US, UK, Netherlands, Germany and Singapore, with candidates for some of these roles coming from a range of locations around the world. Time zone management can be a bit of a challenge!

5 of my candidates received job offers whilst I was away. Most of these were unemployed or had contracts finishing in the next few weeks. It’s great to be making a positive difference to these people’s lives, which will be something to think about, when, no doubt I’ll arrive back in the office on Monday morning to a huge inbox of emails!

One of the places we visited was Sissinghurst Castle Garden, and the famous white garden was looking good (apparently it reaches full bloom in July). The other gardens at Sissinghurst have more varied colour schemes that I liked more (I particularly enjoyed the purple / pink one), but it got me thinking about poetry.

The white garden, along with the others at Sissinghurst, works so well because the planting, despite appearing to be an informal riot of plants, is very well organised. Particularly from a palette perspective. It would be ruined if there were stray red, yellow or purple flowers in it. These flowers have their place, but not here.

And so with poems. As a general rule, good ones don’t have words or lines that feel out of place. Unless of course it’s a deliberate effect, to highlight something, a change in narrative, meaning, or simply as a way to shock the reader or listener out of a state of somnolence. So many times I have been working on one of my poems and looked at a line or stanza that I have thought was strong, that really stood out against the rest of the poem, only to realise, (often a year or so later after a number of failed magazine submissions!), that the reason it stood out was that it didn’t actually fit the rest of the poem.

Of course, (cliche alert!), rules are there to be broken, as we saw when we went to see Derek Jarman’s garden in Dungeness. There seemed to be no obvious colour scheme, but it too worked.

The difference I think though, between Jarman’s garden, and that of Sackville-West’s, (who designed those at Sissinghurst), is that there is quite a lot of space between different plantings in the former case, so I think he gets away with any colour clashes that wouldn’t be the case with the latter garden. But all this is my personal opinion. I really haven’t got a clue what I am talking about when it comes to garden design!

There’s another way to look at writing poetry in the context of less being more. What can be pruned from your poem? What can you cut back? Will the poem survive, or actually thrive without that line or stanza in it? Can that line or stanza be replanted elsewhere to create a new poem instead? (I think I’ll stop with the gardening metaphors here).

Pretty much any good poem will have been edited ruthlessly. There’s a great article on the Magma Poetry website on rules for doing so. Maybe I should read and act on this more myself in view of my lack of success when submitting to this particular magazine!!

Seriously though, there’s good advice here. I hope you find it of value.

I’ve just sent a submission out for the latest edition of South Magazine. One of the poems is pretty dark. It had an uplifting stanza at the end. I’ve removed it. Much better. Depressing as hell, but it’s a better poem. Us poets have to suffer for our art, so why not our readers ?!?

I’ll finish with a garden related poem that first appeared on the Pens of the Earth website back in 2020. It’s quite a long poem – maybe it should have been edited further ( 🙂 )

You can see a lot more varied writing from Portsmouth, Hampshire, Isle of Wight and West Sussex based writers at https://pensoftheearth.co.uk

How many mornings slid one into another,
under the pergola of a lockdown garden,
a mug of black coffee as shadows swung by,
waiting for the page to turn.

A book half read the spine snapped back,
lost sense of time as new days began,
memories warped in the haze of recognition;
as if the past could yet be rerun.

There was a lawn once that much I can recall.
It had a long bay hedge that wrapped around,
lots of trees but no functioning swing,
(I may be wrong for I was young),

but my garden world was full of life,
of that I am sure for whatever it’s worth.
The air was clean the noise from traffic
was not this constant earworm hum.

When my parents divorced the house was sold.
We moved towards the centre of town,
put pieces together as much as we could,
cracks still showed what else could be done?

Truth was parked as the years trundled on.
I made my peace as the poison spread;
the taste of petrol on my morning run,
the heavy metals congealed in my lungs.

When we were trapped in April and March
and silence descended on our city home,
a blackbird called and I could hear
every trill, every repetition sung.

Sky soon cleared, road snarl was gone,
socially distanced as the miasma lifted,
life stretched out to an alternate future,
a glimpse of what we could become,

For there are choices that can still be made,
our ending is not quite yet defined.
As I sit here in my post-lockdown garden
it’s time to make the pages turn.