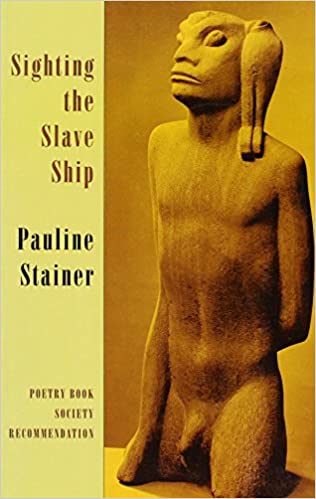 One of the reasons for doing these weekly From my Poetry Bookshelf posts is to remind myself of poets whose volumes, for whatever reason, are languishing on my bookshelf and haven’t been read for a while. This is no reflection on the quality of writing. With so many new collections coming out, and so many magazines (I received three excellent ones last week alone – the latest editions of Banshee, Sonder and South – all worth getting hold of if you can), then I don’t have much time to revisit older books on my bookshelf, but I need to – today’s recommendation is a case in point.

Pauline Stainer has published nine collections of poetry, all through Bloodeaxe. I have her second book, Sighting the Slave Ship, which was published in 1992, and was a Poetry Book Society Recommendation (which I think is how I got hold of a copy). This book is now out of print, but if you like what you see in this post, you can get The Lady & The Hare, New & Selected Poems, (from 2003), plus three of her more recent collections, from her Bloodeaxe page at;

The back cover blurb includes a quote from Anne Stevenson, that ‘Pauline Stainer writes sacred poetry for the scientific twenty-first century. Her poetry preserves a surety of vision, insisting that belief can only increase with knowledge, and that wisdom and faith are still provinces of careful, crystalline language.’

The Poetry Book Society Recommendation for Sighting the Slave Ship states that ‘Pauline Stainer is a poet ‘working at the margins of the sacred’, conveying sensations ‘with an economy of means that is breathtaking… her poems are not merely artefacts, they have an organic life of their own’ (John Burnside). As in all her books, the luminous poems of her second collection Sighting the Slave Ship are minimal but highly charged – with presences and hauntings, sensing the spirit incarnate in every part of the living world’.

I think these two quotes give a good indication as to the direction and focus of her work.

There’s also a nice review of The Lady & The Hare by Paul Morley in the Guardian, which touches on the same comments

Stainer was born in Burslem, Stoke-on-Trent, in 1941. She later left the city to attend St Anne’s College, Oxford, where she took a degree in English. After Oxford she completed an M.Phil degree at the University of Southampton. She has subsequently lived and written, in Essex, the Orkney island of Rousay, and now resides in Suffolk. I’m sure all of these locations, and the history of such places, has influenced her work.

To quote again from an external source, this time a page about her on the Poetry Society website;

‘Her determinedly neo-romantic poetry, which has won several prizes, explores sacred myth, legend, history-in-landscape, and human feeling – and their connections to the ‘inner landscapes’ of the imaginative mind. Her choice of subject matter is perhaps partly a reaction to her growing up in the industrial city of Stoke-on-Trent.

The compact vividness of her visual imagery is akin to that of the Anglo Saxon riddles, symbolist poetry, or the work of García Lorca. Reviewers have also detected the influence of Ted Hughes in her work’.

Re-reading this collection I absolutely adore the precise language and the connections between the contemporary and the past, where real or myth. As an example, her poem Skydivers, which begins as follows;

They fall outwards
as if from the calyx of a flower
each smaller than a falcon’s claw
their target a gravel circle
in the Byzantine barley.

They fall like hushed flame
where once the sun’s disk
was ploughed from the furrow,
coupling, uncoupling
above the drop-zone.

or again, the opening three lines in Transparencies in a Landscape

or finally, at the end of a sequence of eight poems written after Eric Ravilious, the war-artist who was lost on September 2nd, 1942

We glimpse it still –
the spatial mystery of the machine –
a broken water-turbine
in a stream;
wrecked harriers
beached like modern angels
on strange shores.

pleasure-steamers
ghosting the night
in their winter quarters;
the speaking-tubes
on the bridge of the destroyer
springing like African lily
under shelling at sea;

infernal engines
on a bright slipway –
and from the flightdeck,
with all the inconsequence
of revelation,
the crossing arcs
of afterburn.

You can hear Pauline Stainer read some of her poems via the Poetry Archive website, including two from this collection – A Haze Held by Thorns, and The Yew Walk . If you like what you’ve read so far, then it’s definitely worth a listen.

I suspect I may have to get hold of a copy of that selected poems collection from Bloodeaxe. The subject matter in her work is pretty varied – including western art, Christian liturgy, chemistry, medicine, jazz, nature, wildlife and history. But always with that precise, sparse language with striking imagery that says more than is on the page. Isn’t that what all good poetry is about?

As I’m writing this on Easter Sunday, I thought I’d finish by sharing a link to a poem commissioned by the Churches Conservation Trust in 2008. I hope you have, or have had, a wonderful Easter, whatever your faith (or none, if you don’t have one).