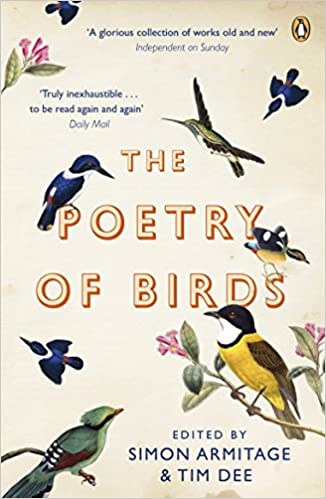 Repeat that, repeat,
Cuckoo, bird, and open ear wells, heart-springs, delightfully sweet,
With a ballad, with a ballad, a rebound
Off trundled timber and scoops of the hillside ground, hollow hollow hollow ground:
The whole landscape flushes on a sudden at a sound.

I heard a cuckoo yesterday. I can’t remember how long ago it was that I last heard one. It prompted me to revisit this brilliant collection of bird poems. Repeat that, repeat sits alongside other Cuckoo poems by Auden and Wordsworth.

The Poetry of Birds is organised by bird rather than poet, which makes it easy to see different writers’ approaches to the same subject. Here’s a couple of poems about crows as an example;

How peaceable it seems for lonely men
To see a crow fly in the thin blue sky
Over the woods and fealds, o’er level fen
It speaks of villages, or cottage nigh
Behind the neighbouring woods — when march winds high
Tear off the branches of the hugh old oak
I love to see these chimney sweeps sail by
And hear them o’er the knarled forest croak
Then sosh askew from the hid woodmans stroke
That in the woods their daily labours ply
I love the sooty crow nor would provoke
Its march day exercises of croaking joy
I love to see it sailing to and fro
While feelds, and woods and waters spread below

This is followed , after a poem by Thomas Lovell Beddoes, by Ted Hughes’ Crow and the Birds, which ends with the following lines;

Crow sprawled head-down in the beach-garbage, guzzling a dropped ice-cream.

With eighteen poems, John Clare features heavily in this collection, hardly surprising, for a poet noted for his observations of nature – his biographer called Clare “the greatest labouring-class poet that England has ever produced. No one has ever written more powerfully of nature, of a rural childhood, and of the alienated and unstable self”.

But this book has an excellent variety of poems and descriptions of birds. I loved Paul Farley’s The Heron, which open’s with the lines;

One of the most begrudging avian take-offs
is the heron’s fucking hell, all right, all right,
I’ll go to the garage for your flaming fags
cranky departure…

or how about this two line poem by Paul Muldoon?

The plovers come down hard, then clear again,
for they are the embodiment of rain.

Of course there are plenty of poems where the bird is an extended metaphor for something else;

When night comes black
Such royal dreams beckon this man
As lift him apart
From his earth-wife’s side
To wing, sleep-feathered,
The singular air,
While she, envious bride,
Cannot follow after, but lies
With her blank brown eyes starved wide,
Twisting curses in the tangled sheet
With taloned fingers,
Shaking in her skull’s cage
The stuffed shape of her flown mate
Escaped among moon-plumaged strangers;
So hungered, she must wait in rage
Until bird-racketing dawn
When her shrike-face
Leans to peck open those locked lids, to eat
Crowns, palace, all
That nightlong stole her male,
And with red beak
Spike and suck out
Last blood-drop of that truant heart.

There are excellent notes at the end of the book on each species described, which can add significantly to an understanding of a poem’s true meaning. For those that don’t know, a shrike is a small, unassuming-looking bird that hunts insects and rodents, often spearing them on sharp branches so as to eat them on a piecemeal basis at a later or more convenient time. I’ll let you guess who, or what, The Shrike is really about.

The Poetry of Birds contains a nice mix of famous and less well known poets and poems, and finishes with a group of more abstract / mythical bird poems. The final poem in the book is, fittingly, this one;

‘ ”Hope” is the thing with feathers’

I’ve heard it in the chillest land –
And on the strangest Sea –
Yet – never – in Extremity,
It asked a crumb – of me.

I was a bird-watcher as a child. Like most who took up this hobby, it hasn’t really left me. If you are of a similar mind, then you probably already have this book. If you don’t get hold of a copy. You won’t regret it. And if ornithology isn’t of interest? This is still an excellent collection of disparate voices that will expand your knowledge and breadth of reading. You can’t go too wrong with a book like this.

The Poetry of Birds is now perched on my virtual bookshelf at Bookshop.org