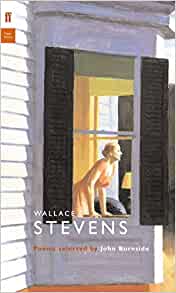 John Burnside, of whom I have not written yet, is one of my favourite poets, which is one of the reasons I got this book. It’s one of a series of poet – to – poet series Faber collections, where a well known contemporary poets writes about, and chooses a small selection of a another poet’s work. Like most, if not all, of the other books in this series it is now out of print (so doesn’t appear on my Bookshop.org page – my attempt to cover some of the hosting costs of this blog – currently at £6.40, which really isn’t going to help that much!).

It’s a small selection – 126 pages in total – not really enough to cover more than an introduction to a poet’s work. But in some ways for an unfamiliar reader it’s a better option. Not as daunting as a collected poems, and, as in this case, a good way to see how a particular poet’s style has developed over time.

This is particularly the case for someone like Wallace Stevens, who is perhaps most remembered, at least, here in the UK, for his earlier poems, primarily those published in Harmonium, his first collection. Harmonium was published in 1923, when the poet was 44 years old.

Harmonium includes The Snow Man, The Emperor of Ice-Cream, Sunday Morning, Peter Quince at the Clavier, and perhaps most famous of all, Thirteen Ways of Looking at a Blackbird, which starts as follows;

I
Among twenty snowy mountains,
The only moving thing
Was the eye of the blackbird.

II
I was of three minds,
Like a tree
In which there are three blackbirds.

III
The blackbird whirled in the autumn winds.
It was a small part of the pantomime.

The literary scholar Beverly Maeder writing for the Cambridge Companion to Wallace Stevens speaks of the importance the author placed upon linguistic structure in many of his poems. In this instance, Stevens is experimenting with the application of the verb ‘to be’ in its many forms and conjugations throughout the 13 cantos of the poem. As Maeder states, the poem “uses or even focuses on ‘to be’ in seven of its thirteen variations on the blackbird. The blackbird is pictured in a different situation and articulated in a different grammatical context in each fragment’ (Beverly Maeder Cambridge Companion to Wallace Stevens).

Another interpretation can be found here on the poem analysis website;

There are plenty of others. But Burnside asserts that ‘Far too many of us still see Stevens as the poet of ‘Thirteen Ways of Looking at a Blackbird‘ and ‘The Snow Man‘ but, as fine as these are, he was much more than that’. This selected collection includes some of the longer sequence poems written towards the end of his life, and shorter poems from his final collection. One of the most well known of the former is An Ordinary Evening in New England, which in thirty-one cantos of six three line stanzas is an extraordinary piece of writing, an extended meditation on what is imagined and what is real. A lot of Stevens’ poetry is about poetry itself (usually a turn-off for me), and is challenging and difficult to fully understand, but then isn’t that the point? Not just with Stevens’ poetry, but with poetry, and life generally? The Twelfth stanza reads as follows;

The poem is the cry of its occasion,
Part of the res itself and not about it.
The poet speaks the poem as it is,

Not as it was: part of the reverberation
Of a windy night as it is, when the marble statues
Are like newspapers blown by the wind. He speaks

By sight and insight as they are. There is no
Tomorrow for him. The wind will have passed by,
The statues will have gone back to be things about.

The mobile and immobile flickering
In the area between is and was are leaves,
Leaves burnished in autumnal burnished trees

In the end, in the whole psychology, the self,
the town, the weather, in a casual litter,
Together, said words of the world are the life of the world.

One poem that, unsurprisingly isn’t included in this book, and also seems to be overlooked by others is ‘Like Decorations in a N….. Cemetery’ – a long poem about death and disintegration into nothingness. Apparently it should be read as an ellipsis, as in (My Poetry is) Like…., and it’s been described as a modernist masterpiece. But I can’t get beyond the vile title, which compounds the use of the N word, (I originally wrote the poem title here in full, but am uncomfortable in having it anywhere on my blog), with a negative appropriation of what is, (or was when it was written in the 1930s), an African-American tradition of grave adornment.

Of course Stevens was a product of his time, something that those commentators who acknowledge this racist language are quick to point out, but does that mean we can give a free pass to someone whose response upon learning of Gwendolyn Brook’s winning the Pulitzer Prize: was to say, apparently to a shocked reaction from those others in attendance, “Who let the coon in?”

Apart from the aforementioned title, (the poem itself doesn’t appear to be as discriminatory although I’ve only read it the once, so I may be missing something), his poetry is generally seen to be ambivalent towards those of other ethnic backgrounds, as opposed to being openly hostile. His upbringing and non-poetic life as a highly successful insurance businessman meant he had little interaction with non-whites.

Of course racism was commonplace in America at that time, (and still is of course, as recent events clearly illustrate), but where do we draw the line with poet’s beliefs and attitudes to others? What about Eliot and Pound’s anti-semitism? Or Pound’s (and for a short time Stevens’) support for Mussolini?

Outside poetry, do we discount Miles Davis’ music because of his violent misogyny? Or what of contemporary musicians such as Morrissey, Ian Brown or Noel Gallagher, and their comments on Covid, or politics (or in Ian Brown’s case pretty much anything!).

Then there’s the allegations of transphobia against JK Rowling and the reaction from fans who said they couldn’t read the books any more – there are, as you’d expect, a lot of articles on that particular controversy online. If you want to find out more then try this summary from the Scotsman website as a starting point;

So where do we go from here? Can we separate the person from their art? Should we? Even with contemporary artists it’s difficult – adding the prism of time makes it even harder.

Or perhaps we should acknowledge the flaws of the individual as a way to have a deeper understanding of their art, as this article on Picasso, who like Davis had, by all accounts, a deeply unpleasant attitude to many of the women in his life;

I keep going round in circles on this – ultimately we all have our own lines beyond which we won’t go, (I’m old enough to have seen Gary Glitter in concert and quite enjoyed it in a mock-ironic way, but I wouldn’t go anywhere near his music now), but I think we have to try, where possible, to separate the person from their art, whilst acknowledging the reality of the creator of the work and try and help, in our own small way, towards the dismantling of abhorrent views and attitudes in current and future generations.

You can admire Guernica, A Kind of Blue and An Ordinary Evening in New England without admiring their creator as an individual.

As for Stevens, it’s instructive to bear in mind that following her award of the Pulitzer Prize in 1950, Gwendolyn Brooks was on the awards panel for the award in 1955. When the other two votes were split between e.e. cummings and Wallace Stevens, she gave her casting vote to Stevens. If she was able to separate the man from his work, perhaps we should be able to do so (see this following article and comments on the poetry foundation website for details).

What do you think? Let me know.